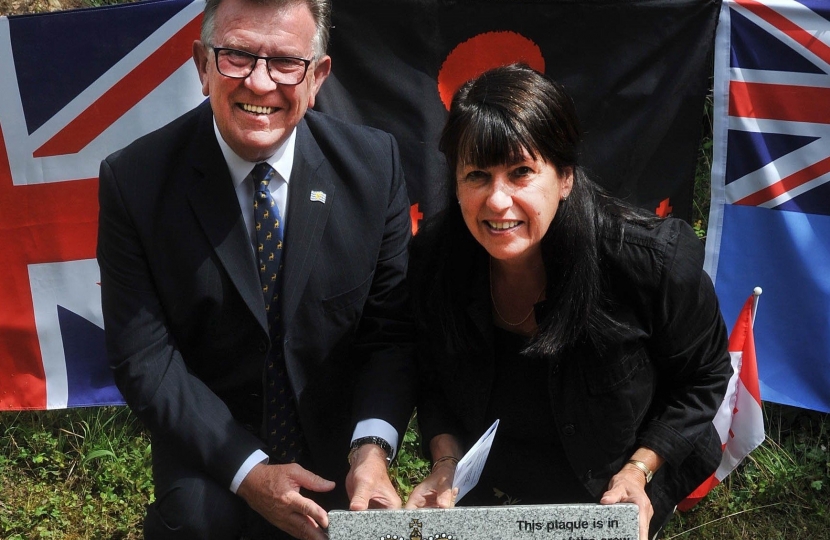 The unveiling ceremony of a remembrance memorial in Offley was held over the weekend. The memorial commemorates 75 years since the crash of a Lancaster Bomber in Great Offley which claimed the lives of the pilot and crew, as well as members of the Offley community.

Cllr Barnard, who introduced the unveiling service, said, "It is an absolute privilege for me to introduce this ceremony to commemorate the bravery of our predecessors, and to mark our respect and gratitude to those who gave their lives to protect our freedom.

At 04:20 hours Pilot Officer Albert Letts took off from the runway at RAF Witchford. This was the seventh time Letts and his crew had taken off from Witchford on an operation, since arriving at the Fenland airfield in June 1944. Pilot Officer Letts’ aircraft was Lancaster Bomber KO-J LM616 which had also arrived new at Witchford in June and was now on its 10th operation, an operation that neither aircraft, nor crew would return from.

Pilot Officer Letts’ aircraft was one of 25 Lancasters that 115 squadron were contributing to an operation to bomb enemy positions concealed in woods at Emieville. The last of the Witchford Lancasters left the runway at 04:40 hours.

On arrival over the target area the crews dropped these bombs from heights ranging from 8,000 -10,000 feet onto the wooded area. Many fires were seen until smoke and dust obscured any further visual observations.

With all the bombs dropped, the Lancasters turned for home and the safety of their respective airfields. It is not known if Pilot Officer Letts suffered any damage or mechanical failure over the target area or on the return journey, but the next time the aircraft was seen, it was circling over the village of Great Offley Hertfordshire, on what was a very misty morning.

Eye witnesses at the time thought that one engine was on fire and the pilot was looking for somewhere to put the aircraft down.

The Lancaster had arrived from the direction of Hitchin just after 07:00 hours going west towards Great Offley, a village that stands on much higher ground.

At West End Farm, Great Offley, George Handley and his two sons were in the cow shed carrying out the early morning milking. George’s wife Alice and their two daughters, Mary and Elsie, were in the house when a terrible chain of events started to unfold.

At 07:10 hours it is probable that Pilot Officer Letts decided to try and crash land the aircraft unsure of what the terrain was like below the mist. At a spot called Eagles Nest the aircraft clipped some trees taking several branches with it, continuing on, the Lancaster cut two furrows across a field, and swept up two large water tanks before careering into the farmhouse at West End Farm.

The house, although extremely well built, was totally destroyed and the fuel tanks of the Lancaster ruptured and exploded creating a terrible inferno from which no-one could escape.

Villagers and the National Fire Service came to help, but could do no more than prevent the fire spreading to other farm buildings. More help arrived with fire appliances from Luton and Letchworth to help bring the fire under control.

Mrs Alice Handley and her two daughters died in the crash, and and the fire that ensued.

George’s youngest daughter, Elsie, who was a Private in the ATS had only arrived home the previous evening for a few hours leave from a gun site, where she was stationed.

George Handley and his two sons had escaped the disaster as the cow shed was not damaged in the crash. George, unable to cope with the loss of his wife and daughters, took his own life in 1949.

Pilot Officer Letts and crew all perished in the crash and the ensuing fireball."