I’m Dr. Charles Laing, the Conservative Party candidate for Hitchin Walsworth in the upcoming District Council election. I grew up in Stevenage, where I was Head Boy of The St John Henry Newman Catholic School before I went off to university.

Before moving to Hitchin with my wife I spent 5 years in Germany as a government scientist representing the UK within the German Space Agency. I was fortunate to work on several missions including one with the UK astronaut Major Tim Peake.

During my time in Germany I ran multinational teams of scientists and engineers, and collaborated with NASA and the ESA. I saw first hand the importance of diversity in teams and how to best work with a wide range of individuals.

Now I work as a Senior Consultant solving problems daily for a range of clients and look forward to tackling the challenges facing Walsworth head on, holding the Labour/Lib Dem council to account, and working hard for you to deliver results.

Get in Touch with Charles 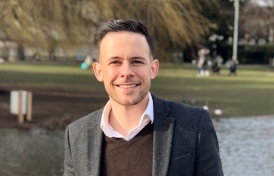